SHOT 12/26/2007 - Milagros adorn a cross for sale at Saints & Martyrs in Old Town Albuquerque. The area is a historic district in Albuquerque, New Mexico, dating back to the founding of the city by the Spanish in 1706. Today it is a popular shopping and tourist destination. Old Town comprises about ten blocks of historic adobe buildings grouped around a central plaza (a common feature of Spanish colonial towns). Many of the buildings in Old Town are houses that have been converted into restaurants and small art and souvenir shops. Albuquerque is the largest city in the state of New Mexico, United States. It is the county seat of Bernalillo County and is situated in the central part of the state, straddling the Rio Grande. Milagros (also known as ex-votos or dijes) are religious folk charms that are traditionally used for healing purposes and as votive offerings in Mexico, the southern United States, other areas of Latin America, as well as parts of the Iberian peninsula. They are frequently attached onto altars, shrines, and sacred objects found in places of worship, and they are often purchased in churches, cathedrals or from street vendors. Milagros come in a variety of shapes and dimensions and are fabricated from many different materials, depending on local customs. For example, they might be nearly flat or fully three dimensional; and they can be constructed from gold, silver, tin, lead, wood, bone, or wax. In Spanish, the word milagro literally means miracle or surprise..(Photo by Marc Piscotty/ © 2007) 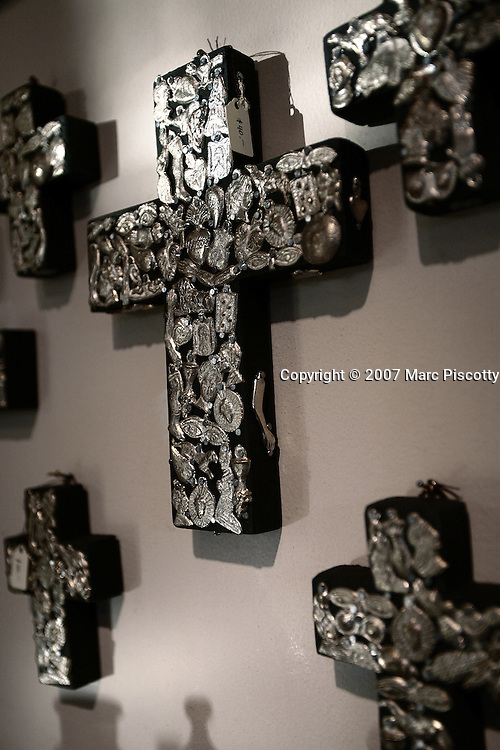