SHOT 1/19/19 1:45:38 PM - A red crowned mangabey howls at the Denver Zoo in Denver, Co. The collared mangabey (Cercocebus torquatus), also known as the red-capped mangabey, or the white-collared mangabey, is a species of primate in the family Cercopithecidae of Old World monkeys. The collared mangabey has grey fur covering its body, but its common names refer to the colors on its head and neck.[4] Its prominent chestnut-red cap gives it the name red-capped, and its white collar gives it the names collared and white-collared. Its ears are black and it has striking white eyelids, which is why some refer to it as the "four-eyed monkey". It has a dark grey tail that exceeds the length of the body and is often held with the white tip over its head. It has long molars and very large incisors. The collared mangabey is found in coastal, swamp, mangrove, and valley forests, from western Nigeria, east and south into Cameroon, and throughout Equatorial Guinea, and Gabon, and on the Gabon-Congo border by the Atlantic shore. The Denver Zoo is an 80-acre zoo located in City Park in Denver, Colorado. Founded in 1896, it is owned by the City and County of Denver and funded in part by the Scientific and Cultural Facilities District (SCFD). It is the most popular paid attraction in the Denver metropolitan area. The Denver Zoo houses species from all over the world, including hoofed mammals, carnivorous mammals, primates, pachyderms, birds, reptiles, and fish. The zoo's animal collection contains 4,125 specimens representing 613 unique species. (Photo by Marc Piscotty / © 2018) 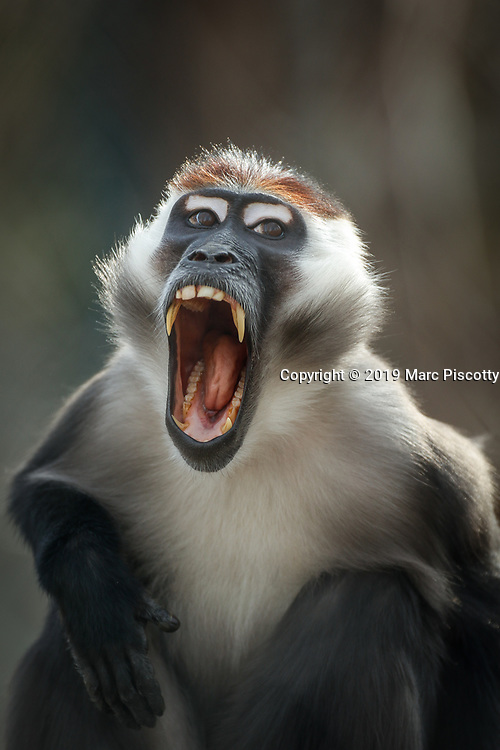