SHOT 1/23/10 6:28:44 PM - A Great Egret in flight over a marsh in in San Pancho, Mexico. The Great Egret (Ardea alba), also known as the Great White Egret is a large egret. The Great Egret is a large bird with all-white plumage that can reach one meter in height and weigh up to 950 grams (2.1 lb). It is thus only slightly smaller than the Great Blue or Grey Heron (A. cinerea). Apart from size, the Great Egret can be distinguished from other white egrets by its yellow bill and black legs and feet, though the bill may become darker and the lower legs lighter in the breeding season. In breeding plumage, delicate ornamental feathers are borne on the back. Males and females are identical in appearance; juveniles look like non-breeding adults. It has a slow flight, with its neck retracted. The Great Egret feeds in shallow water or drier habitats, feeding mainly on fish, frogs, small mammals, and occasionally small birds and reptiles, spearing them with its long, sharp bill most of the time by standing still and allowing the prey to come within its striking distance of its bill which it uses as a spear. It will often wait motionless for prey, or slowly stalk its victim. It is a common species, usually easily seen. (Photo by Marc Piscotty / © 2009) 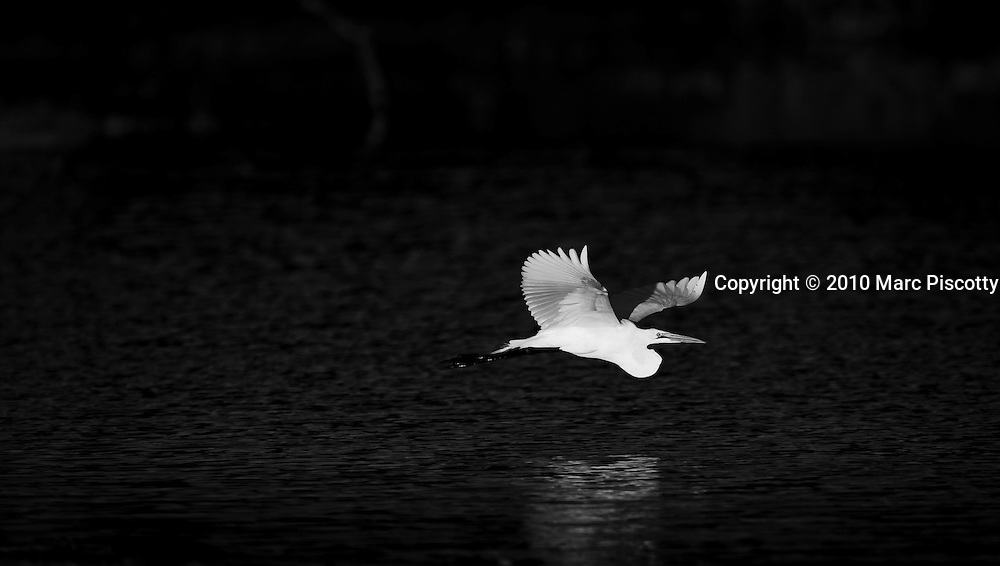