SHOT 9/7/2007 - The John Hancock Center (left) at 875 N. Michigan Ave. in Chicago, Illinois, is a 100-story, 344 m (1,127 ft) tall skyscraper designed by structural engineer Fazlur Khan of Skidmore, Owings and Merrill. When completed in 1969, it was the tallest building in the world outside New York City. It is the third-tallest skyscraper in Chicago and the fourth-tallest in the United States, after the Sears Tower, the Empire State Building and the Aon Center. When measured to the top of its antenna masts, it is stands at 457 m (1,500 ft). The building is home to offices and restaurants, as well as about 700 condominiums and contains the highest residences in the world. This skyscraper was named after John Hancock. Chicago is the largest city in the state of Illinois, the largest in the Midwest and, with a population of nearly 3 million people, is the third largest in the United States. Chicago is a city rich in history and also renowned for its architecture. Chicago attracts about 33 million visitors annually from around the world and nation. Upscale shopping along the Magnificent Mile, thousands of restaurants, as well as Chicago's eminent architecture, continue to draw tourists every year. Includes images from the Shedd Aquarium, the Magnificent Mile and Millenium Park (Including Cloud Gate aka "The Bean" and Crown Fountain)..(Photo by Marc Piscotty © 2007) 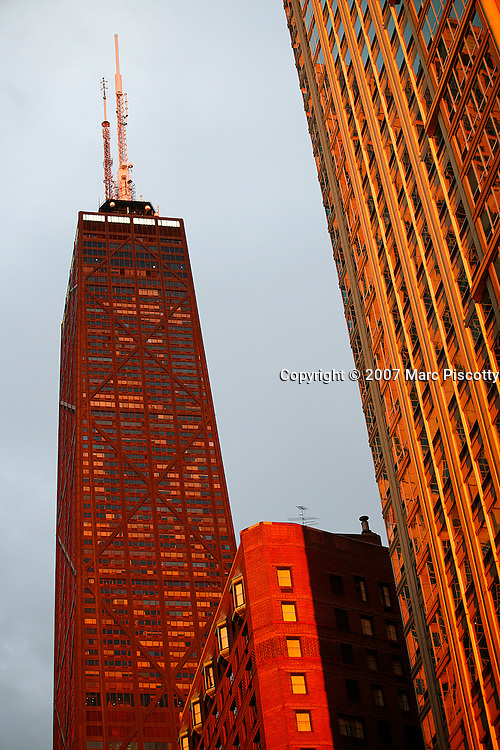