SHOT 1/25/10 6:50:25 PM - Tacos al pastor at Tacos el Ivan in Sayulita, Mexico. Al pastor (Spanish; "Shepherd style") is a dish developed in Mexico City, likely as a result of the adoption of the shawarma spit-grilled meat brought by Lebanese immigrants to Mexico. Having derived from the shawarma, it is also similar to the Turkish döner kebap and the Greek gyros. Whereas those dishes are usually lamb-based (thus the "shepherd style" name), tacos al pastor in Mexico are usually made from pork. Usually pork, it is marinated over one or two days with a blend of different chili peppers, spices and herbs (such as adobo), and then slowly cooked with a gas flame on a vertical rotisserie called a Trompo (lit: spinning top), very similar to how Shawarma is cooked, with a piece of fresh pineapple on top.[2] The juice from the pineapple contains an enzyme called bromelain, which breaks down protein and makes the meat very tender. When ready, the meat is then thinly sliced off the spit with a large knife. It is served on small tortillas, with finely chopped onions, cilantro and a small slice of pineapple, and usually topped with some lime juice and hot salsa. Sayulita is a small surfing and fishing village about 25 miles north of downtown Puerto Vallarta in the state of Nayarit, Mexico, with a population of approximately 4,000. Known for its consistent river mouth surf break, roving surfers "discovered" Sayulita in the late 60's with the construction of Mexican Highway 200. In recent years, it has become increasingly popular as a holiday and vacation destination, especially with surfing enthusiasts and American and Canadian tourists. (Photo by Marc Piscotty / © 2009) 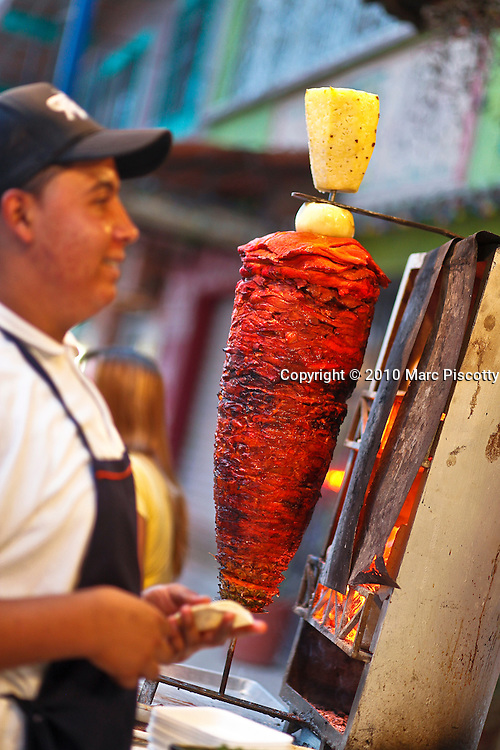