Black Canyon of the Gunnison

Visitors take in the spectacular view from the Painted Wall View Overlook in the Black Canyon of the Gunnison National Park. The canyon floor at the overlook is more than 2,300 feet deep and could easily fit the Empire State Building inside it. The park's unique and spectacular landscape was formed slowly over thousands of years by the action of water and rock scouring down through the rock walls of the canyon. No other canyon in North America combines the narrow opening, sheer walls, and startling depths offered by the Black Canyon of the Gunnison. The same water that formed the canyon is also necessary for its future. The plants and animals in the canyon rely on a steady flow year round as well as occasional peak flows to maintain the ecosystem in the canyon. The Bureau of Reclamation has a number of dams upstream and Gale Norton, The Secretary of the Interior, worked out a deal with everyone involved but environmentalists disagreed with it and the issue is tied up in the courts. Black Canyon of the Gunnison National Park is a United States National Park located in western Colorado, and managed by the National Park Service. The park contains 12 miles of the 48 mile long canyon of the Gunnison river. The national park itself contains the deepest and most dramatic section of the canyon, but the canyon continues upstream into the Curecanti National Recreation Area and downstream into the Gunnison Gorge National Conservation Area. The Gunnison River drops an average of 43 feet per mile (8 m/km) through the entire canyon, making it one of the steepest mountain descents in North America. The Black Canyon is so named on account of its steepness which makes it difficult for sunlight to penetrate very far down the canyon. As a result, the canyon walls are most often in shadow, causing the rocky walls to appear black. At its narrowest point the canyon is only 40 feet (12 meters) across at the river. The extreme steepness and depth of the Black Canyon formed as the result o 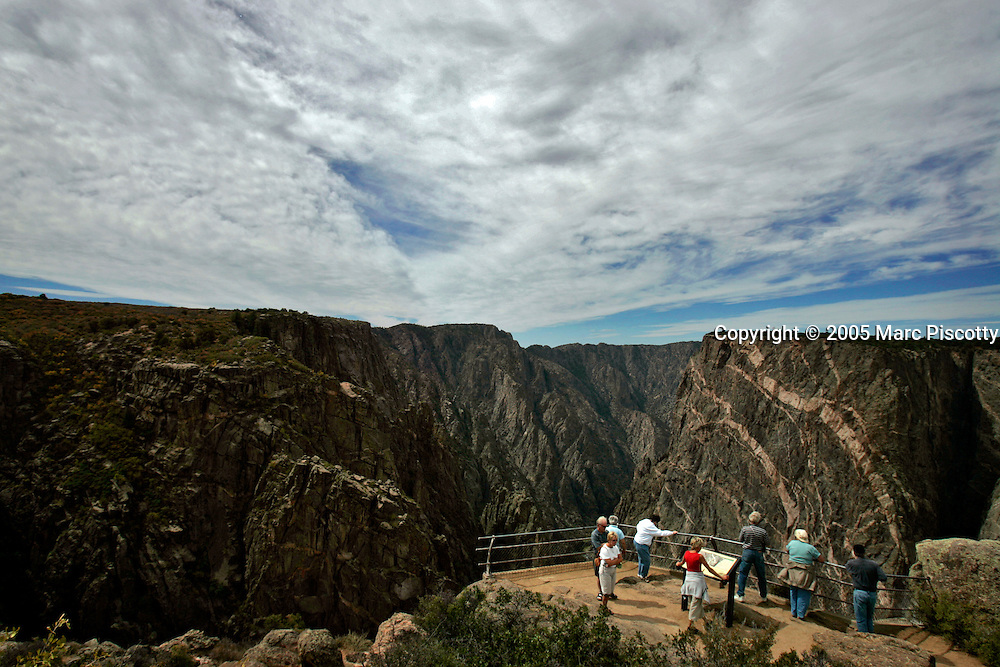